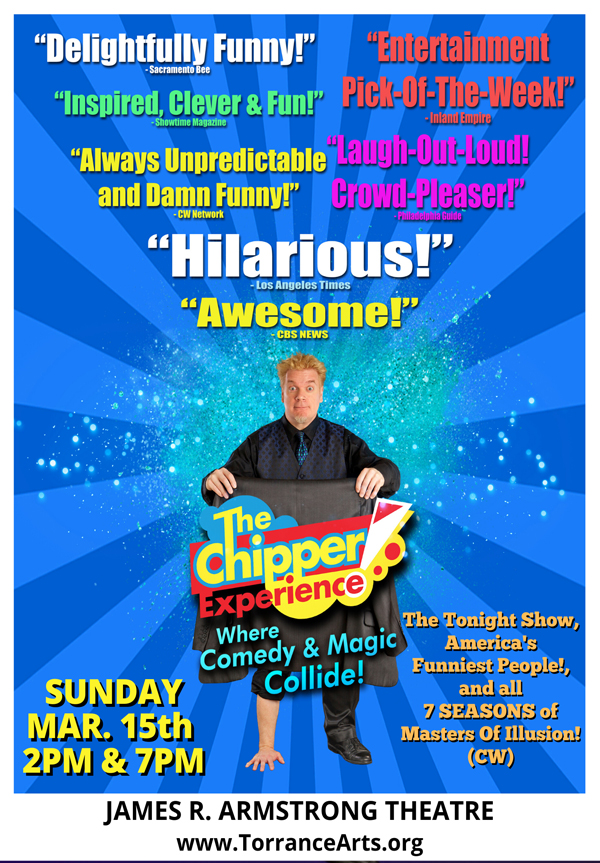 Chipper presents all-new mischief and magic as he returns for a special engagement at The James R. Armstrong Theatre!  Come join the fun!

Chipper has appeared on numerous television shows, including The Tonight Show, Disney Channel, Don’t Blink, America’s Funniest People, and all SEVEN seasons of Masters Of Illusion.   He’s also been twice awarded “Comedy Magician of the Year!” as well as the Senator Crandall award for “Excellence In Comedy”.    Chipper tours internationally with his critically-acclaimed show, “The Chipper Experience! – Where COMEDY & MAGIC Collide!”, as well as other national touring stage productions like “Moon River and Me” and Broadway’s “CIRCUS 1903”.  He was most recently nominated for the 3rd time for “Stage Magician of the Year” by the Academy of Magical Arts – The Magic Castle, in Hollywood, CA.

Growing up the son of an aerialist and a professional clown with Ringling Bros. Barnum & Bailey Circus, Chipper soon developed his own unique style of mixing comedy into his original magic routines. A few decades later, he has performed all over the world, and his one-man show ran for a record-breaking 600 performances in Lake Tahoe.  He has appeared onstage alongside such stars as The Osmond Brothers, Mary Wilson, Paul Williams, Garry Shandling, Paul Reiser, Carol Leifer, Collin Raye, Judy Gold, and Michael Bolton.