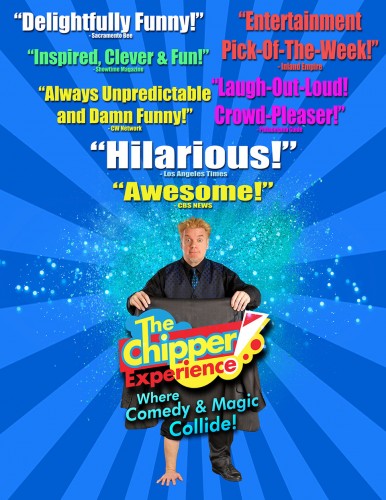 Crescendo Chapter of the Guilds of Segerstrom Center for the Arts: Celebrity Speaker Series 2021

Chipper brings his hilarious one-man show featuring side-splitting comedy, magic, and fun-filled surprises to our first program of the year. His high energy, wit, and laughs make this a memorable experience of fun!

Chipper has appeared on numerous television shows, including The Tonight Show, Disney Channel, Don’t Blink, America’s Funniest People, and all EIGHT seasons of the hit series, Masters Of Illusion!, on the CW Network!  He’s also been twice awarded “Comedy Magician of the Year!” as well as the Senator Crandall award for “Excellence In Comedy”.    Chipper tours internationally with his critically-acclaimed show, “The Chipper Experience! – Where COMEDY & MAGIC Collide!”, as well as other national touring stage productions like “Moon River and Me” and Broadway’s “CIRCUS 1903”.  He was most recently nominated for the 3rd time for “Stage Magician of the Year” by the Academy of Magical Arts – The Magic Castle, in Hollywood, CA.

Ticketed Event: $30 for general admission and Crescendo Chapter members. Bowers Museum members may buy one discounted ticket for $20. Students with valid student ID may purchase tickets for $25 each or three for $20.