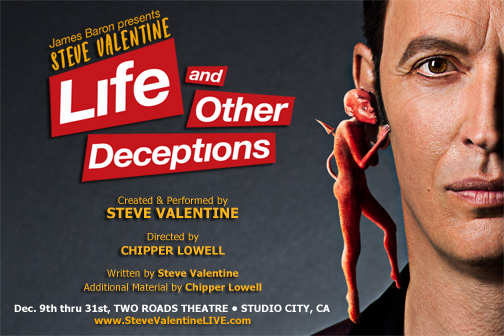 Okay – The cat’s out of the bag! — I am excited to finally spill the beans that I have been busy “behind-the-scenes”, directing Steve Valentine‘s incredible new solo show, “Life & Other Deceptions”, which will premiere at the Two Roads Theatre, in Studio City, CA.   Just a warning that tickets for this limited run will be going FAST, so if you’re in the Los Angeles area, make sure to make your reservations NOW.

For those who don’t know exactly who Steve is (But you have that nagging feeling that you’ve seen his face hundreds of times over the last two decades), this talented actor and highly skilled magician has been honored twice as “Close-up Magician of the Year!” by the Academy of Magical Arts (Magic Castle).  Steve has also appeared in over 250 hours of television, a dozen movies (Christmas Carol, Spiderman 3, The Walk, Mars Attacks, etc.), countless national commercials, well known animated series, two multi-award-winning video games, and four successful television series: Crossing Jordan, Nikki, I’m In The Band, and Estate of Panic. 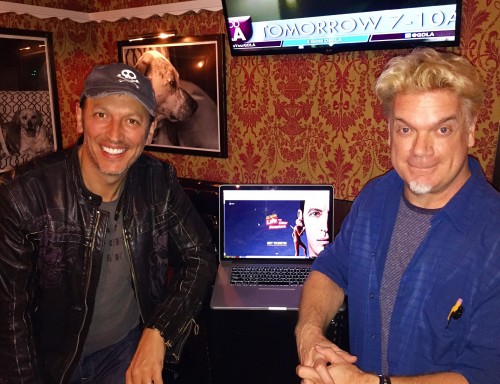 With this unique STAGE production, Valentine takes you on a wild ride through his extraordinary life journey, and animates it all with incredible sleight of hand.  A unique combination of performance art and intricate magic act, “Life and Other Deceptions” is at once hilarious, dramatic, touching, intimate, a little raunchy here and there, and definitely mind blowing.

This theatrical project has been in the works for over 10 years, with Steve writing the script based upon his unbelievable acting and performing career, and making revisions along the way.  Extensive research was also done on many of the effects and magic within the show, resurrecting long forgotten classic effects, while adding an original twist to them for today’s audiences.  This was all in addition to one-of-a-kind magic routines created by Steve, along with great collaborators in the field of magic who have consulted on major television and stage shows.

The beauty of this particular production is that it takes place in a VERY intimate setting of less than 60 seats, thus giving each and every person a feeling of being truly immersed in the magic only a few feet away from them — Yep! – Live and In Person.

I’ve known Steve for over 20 years, and in addition to being a great friend and creative thinker, he’s also an fantastic actor in TV and film, working alongside notable celebrities such as Melissa McCarthy, Patrick Stewart, Albert Brooks, Joseph Gordon-Levitt, and Charlie Sheen.  If that weren’t enough, I can still fondly remember the first time I saw him perform close-up magic at the Magic Castle.  I was literally blown away by his skill level, as were audiences each and every night of his run.  Add to that his infectious English personality and quirky comedy, and you’ve got a recipe for a great evening of theater.   I’m so proud to be part of this new, theatrical journey, and I know you will love it, too!

Just a reminder that seating is extremely limited, and this run consists of only 9 performances during December.  So, if you want to be the first to experience this new production, reserve your seats as soon as possible.  I promise you an incredible evening of fun and surprises!   🙂