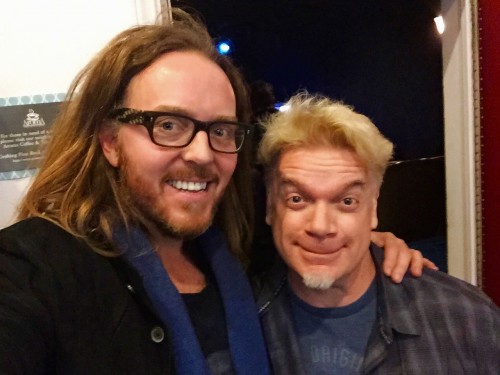 Well, I must say, it was SUCH a TREAT to finally meet and chat with someone I greatly admire.  In this case, it was Tim Minchin, who is an outstanding comedian and songwriter from Australia, who has made quite the name for himself when it comes to his live performances, hilarious and thought-provoking songs, and his new passion of writing musicals.  He is the brains behind the worldwide hit stage production of “MATILDA” which has won countless awards for his composing and lyrics.   If you haven’t already seen it, trust me, you’ll love it.

His newest venture is taking on the musical version of the classic comedy film, “Groundhog Day”, which has recently opened on the West End in London and will be making it debut here in the states in good ol’ NYC in 2017.   I am just amazed at the amount of material that this guy has produced over the years.   And there’s no doubt that he’ll be around for quit awhile.

While directing Steve Valentine’s “Life and Other Deceptions” (Which, by the way, we’ve SOLD OUT every show and received enthusiastic standing ovations for), Tim and his lovely wife attended one of the performances and had a blast.  We got to hang for a bit and ‘talk shop’ in addition to something that’s near and dear to both of our hearts:  Raising children to be smart & critical thinkers and truly self-reliant.   It was a pleasure to discover firsthand how warm and generous a person Tim is, and that’s always nice — to be able to meet someone whose work you love and find out that they’re down-to-Earth and likable as well.    Whew!

For those who haven’t been properly introduced to Minchin’s brand of cerebral humor and songs, you can check out many of his live performances on YouTube, including some of his solo concerts (He sells out all the time!) and his TV appearances, playing selections from his own repertoire as well as songs from his two, critically acclaimed musicals.  I’ve included one of his songs below, keeping with the holiday season.  Enjoy! – The world needs more creative people like Tim!    : )