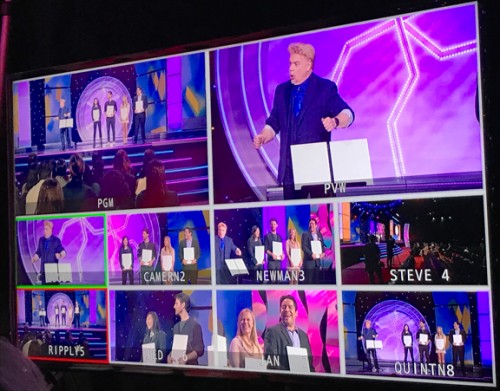 In a whirlwind 48 hours, we finished up the last of 5 shows in Toronto, Ontario, Canada – a Sunday matinee – and then flew straight to Los Angeles, taped multiple segments for a TV show, repacked, and was on flights to the east coast to continue our multi-city tour.  Whew!

In January, I started this year’s tour of “Masters Of Illusion – LIVE!”, and always have a blast traveling from city to city.  Part of this is probably because of my own upbringing, being raised by ‘show business’ parents, and working on circuses, arena shows and threatrical productions that toured all over the U.S., Canada, and other countries.   I love the thrill of waking up in a new town, exploring the new venue, and checking out the surrounding shops and streets.   It’s like Christmas.  Really.   I ‘get’ to experience a completely NEW audience of 1,000 to 3,000 people each and every night, and for me, that always gives me a bit of goosebumps.

This tour was no different, and I was lucky that the other artists and crew on the show were amazing people.  No egos, just good talented people who quickly became fast friends and we love each other’s company.  The beginning of the tour took us to large 2,000 seat venues in Florida, and then up along the coast into Canada.  Where you ‘get’ to experience the kind of cold that make you actually FEEL your brain freezing inside your head without gulping down ice cream really fast.  Excrutiatingly cold…and I loved it.   Anything that make you aware of yourself and your surroundings, good or bad, to me is a thrill.   And the audiences, once they’re all nestled into their warm seats inside the theaters, are so wonderful and grateful that for two hours we’re able to let them forget that their cars are most likely burried under layers of snow outside.     Live theater experience.  In a way, that connection is just one of the most ‘human’ things we can be part of.

At this point, I have been part of the “Masters Of Illusion” television series for all four years that it’s been on the air, on the CW network.   And those tapings can be stressful, happy, hurried, rushed, estatic, and every other emotion thrown in for good measure.   I’m usually performing routines I’ve created in the previous 4-6 months, and there’s always the worry about the studio audience liking what I’ve come up with, or the camera angles being correct, etc.  And every taping ends with a feeling of accomplishment…That it is ‘in the can’, done, and you look forward to your segments airing later in the year for everyone to see.

This year, ‘season five’, was scheduled to tape later than normal, (almost a full MONTH later) and I quickly realized that I might not be available for this seasong FIVE taping due to being out ‘on tour’, ironically with the same company for the live version of the show.  (“Masters Of Illusion – LIVE!”)  Oh well, can’t be greedy, and I was happy and grateful to have appeared multiple times year in the previous four seasons.   And then one day we suddenly got word that there was a 2-3 day ‘hole’ in our tour schedule that lined up right at the tail end of the scheduled 8 day taping back in Los Angeles.  The company surprised us with quick flight arrangements, hotel, etc., and added an additional 9th day of taping at the studio to accommodate those of us out on the tour.  Yay!  We knew it would be grueling, but we relished the chance to once again be part of the new season.

Our last day of shows in Toronto area, Markham Theatre to be exact, we finished up a matinee and quickly packed.  Within 2 hours, we were headed to the airport for a nonstop flight from one coast to another, back in the states. Flights got delayed and I wound up back in southern California around One in the morning, the DAY of our taping.  Yikes.  With bleary eyes I drove straight to my home and gathered all of my props for the routines I would be performing on the TV series, and then headed for the studio as the sun was coming up.   Exhausted, but happy to have made it to my destination.

For those who haven’t experienced a television taping there is a LOT of sitting around.  But the fun part was getting to hang with great friends in the biz, both fellow magicians and illusionists, as well as the fantastic crew behind the scenes.  With this being season 5, it really does feel a bit like a family reunion.   This time around, I created not only some funny stage routines, but also a special routine that would take place right in the middle of the studio audience, surrounded 360 degrees by people focused on me while I tried to make sure my ‘secrets’ were kept….well, secret.   Everything went off without a hitch and I loved the audience responses to my material – Especially the ‘in-the-audience’ piece (Some literally screamed – a little ‘shock magic’ if you will.  I won’t give you any spoilers, but make sure to check it out.) 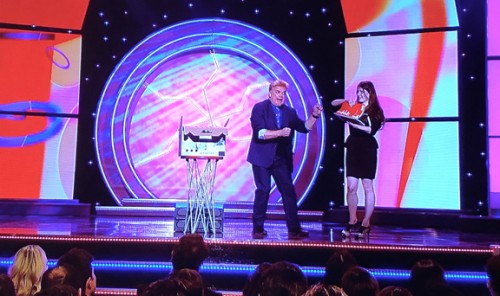 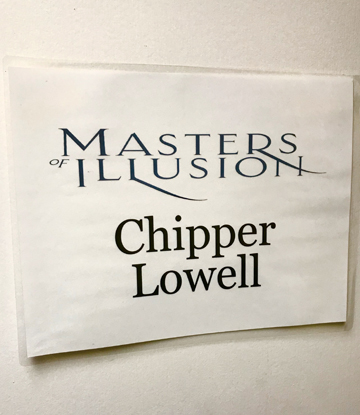 We wrapped around 11pm or so, and I drove the 90 minutes back to my home, and immediately repacked my luggage for a 6AM flight back to the east coast to resume our national tour.  Once at our new theater, I threw on a sleep mask and snagged 2-3 hour catnap, giving me just enough energy to get thru the tech rehearsal and a fantastic evening performance with a great audience.  Whew!!   Yes, there are times when it feels like you’re going crazy with all of the travel, stress, etc., but as I’ve said before, I wouldn’t change it for anything in the world.  The next day was a litle longer sleep and slowly my body clock got back on track.  🙂