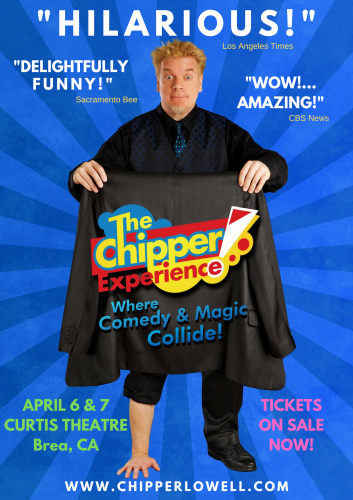 Yes, friends, it’s true!  My show has hit its 20th anniverary!  Wow!  Two decades of trotting the stages all over the United States and a few other countries!  Our son was a wee two-year old the first time this show appeared at the beautiful and intimate Curtis Theatre, in Brea, CA.   And so, to celebrate this milestone, I will be returning to the VERY SAME VENUE!  Just a way of thanking those who trusted me all those years ago with my little pipe dream of doing a full evening show, and it now turning 20 years old!

These THREE upcoming shows will be featuring not only audience ‘favorites’ and ‘signature routines’ of mine, but also brand new MAGIC and laughs!  I’ll even premiere a few cool effects and routines that will be seen later this year on our all-new season of “MASTERS OF ILLUSION” (Friday nights, on the CW network!)  The “Chipper” show is edgy fun, and yet suitable for all ages 7 and up!  Tickets are going fast!  But for those reading this post, I also have a ‘secret code’ that will give you $5 OFF each and every ticket you purchase.  (code: “MAGIC” — We made it easy to remember!  😃❤️

I’m honored and very excited to be returning to the place “where it happened” (to stupidly quote a riff from HAMILTON), and please be aware that this theatre has limited seating, so make sure to get your tickets in NOW rather than wait and be disappointed that they were all snatched up.  In short a great and memorable evening for young and old, and filled to the brim with “clean comedy” throughout!