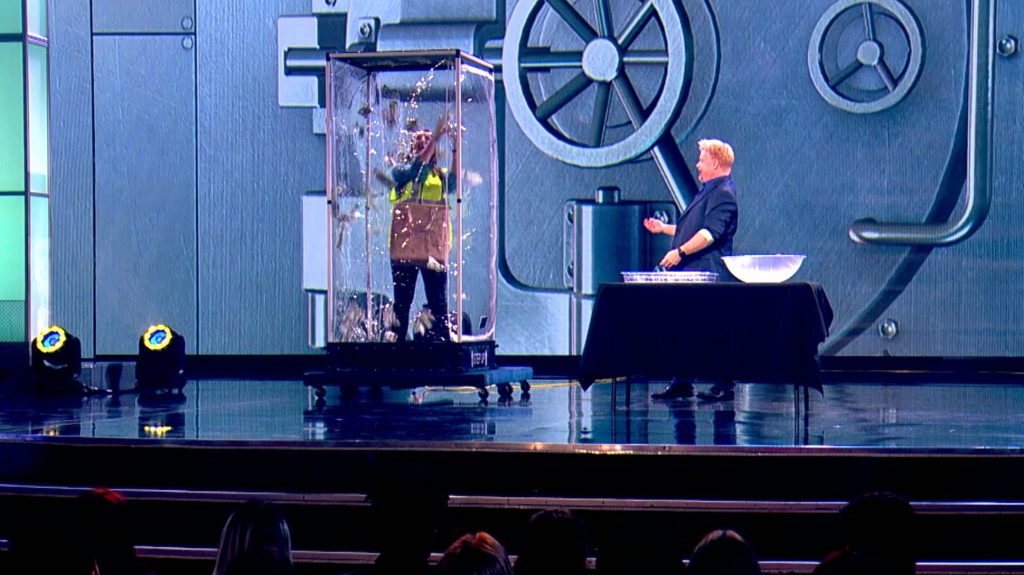 Chipper tries for an unbelievable ‘prediction’ in the season finale of “Masters Of Illusion” in a piece called THE VAULT.

So, it’s been awhile since I last blogged.   Life got in the way, and that’s a good thing.   Time with family, touring, creating new bits and routines for my shows, reading, biking, and more time with the family.   It’s actually been a great year so far and each week has been packed to the brim with activity, and more importantly, the need to solve things and use my my imagination.  🙂

I’ve done a LOT of touring this year, and most excited to be part of “CIRCUS 1903”, a wonderful stage production that has appeared on Broadway and London’s West End.  It’s a very theatrical version of a circus set in the year 1903, complete with incredible artists, variety acts, original music score, and giant ‘elephant’ puppets created by the same geniuses behind “WAR HORSE”.    More on that later in another blog!  🙂

In amongst all of that, I created and taped multiple appearances on “Masters Of Illusion” for the CW Network.  The series is now in its 6th season, and I’ve been fortunate to be part of this popular show each and every season since it started.  It gave me a deadline of sorts to create new magic effects, which later would be put into my own live stage show, adding something a little different each time I went out on tour.    This new season I whipped up a bit of hocus-pocus using giant playing cards, money, rubber bands, wind machines, and even Q-Tips!  (You’ll have to watch it to know what I mean.  No spoilers!  But if you missed any episodes, simply head on over to the CW official website, and once an episode has aired they’ll have them available for viewing online.  All free, too!)

We taped in January, and the series has been airing now thru the summer and winds up with its finale episode on September 27th.   And the final one of my segments will be on that night as well!   Hope you enjoy!

We don’t know if there will be a Season 7, but you never know.   Magic is still VERY popular these days and the number of shows pertaining to magic have soared recently both on networks and streaming services like netflix.  I’m sure I’ll be popping up on other shows here and there down the road.  Will be sure to keep you all updated!  Meanwhile, check out my calendar to see if I’m playing in a theater or venue near you!   TV is great, but watching it ‘live’ is really the best thing there is.   Thank you again for all your support and kinds words over the last couple of years.  All greatly appreciated!