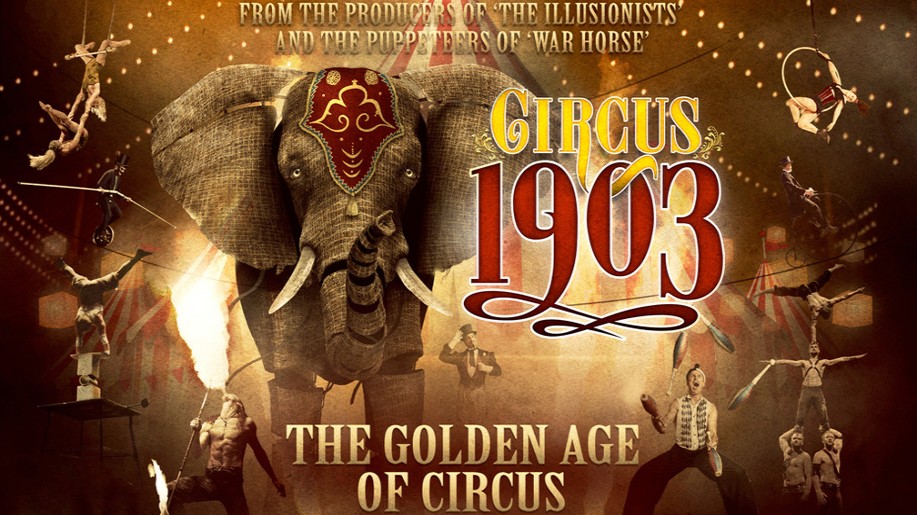 I have to say that this year has been filled with some pretty fun gigs.  This one is no different.  Back in March or April I was asked to join this incredible show – CIRCUS 1903 – to play the lead role of ‘owner/ringmaster’.    After juggling my calendar around I was finally able to fit it in, and I’m glad I did.   It’s a terrific stage production that has appeared on Broadway as well as London’s West End and even Sydney’s Opera House.  This show is set in the 1903 and portrays what a circus might be like from that time period, but with a theatrical flair.  (It plays theatres and performing arts centers, not actually circus tents.)   The set is amazing and the original music score is just fantastic.  And in addition to a highly skilled cast of top-notch circus artists, the show also featured two life-sized ‘elephants’ that are actually huge puppets controlled by a team of world-class puppeteers.  The elephants were designed by the same people who created the horses for the critically-acclaimed “War House”. 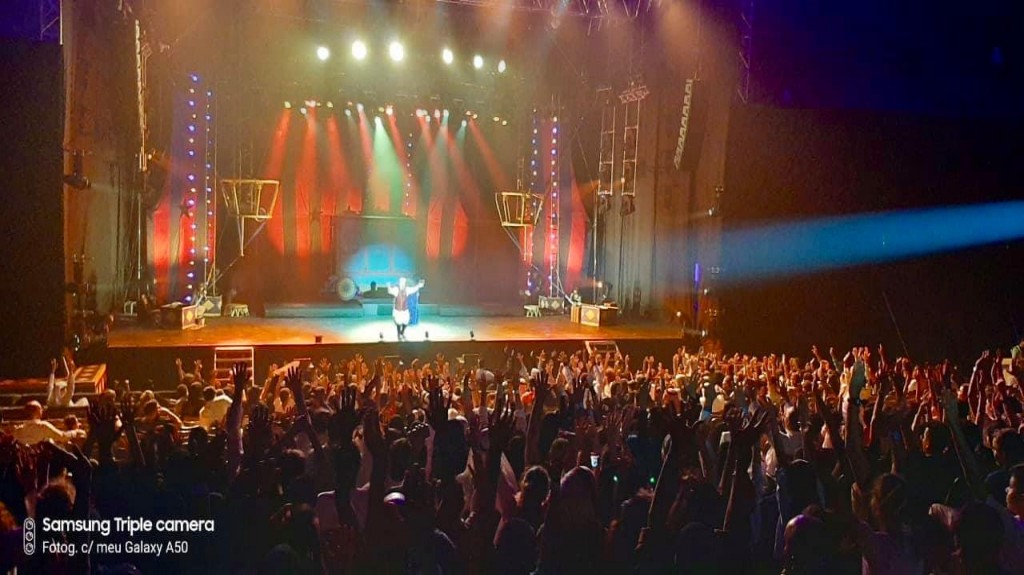 My character ties the whole show together, well, very much like a ringmaster would, while also being able to perform several of my own spots throughout the two-hour production.    It’s a nice ‘blend’ of my original routines while also playing a very specific character that’s a bit of an exaggeration of my own personality.  ‘Larger than life’, if you will.   I’m pretty much running around nonstop onstage and off during the entire show, and I just love it.   Especially having toured so much with my solo touring show, where this givess me the opportunity to work with some of the best artists around and they’re all lovely people to hang out with as well.   I still get goosebumps standing off in the wings watching the elephants walk out onto the stage.  Even though we’re all aware that they’re being manipulated, you still feel like they’re truly real, living and breathing right in front of you.   And it’s not just me – You should hear the sold out audiences audibly gasping with ‘oohs & aahs’, the squeals of kids in the house when the little elephant, ‘Peanut’, runs out to greet everyone. 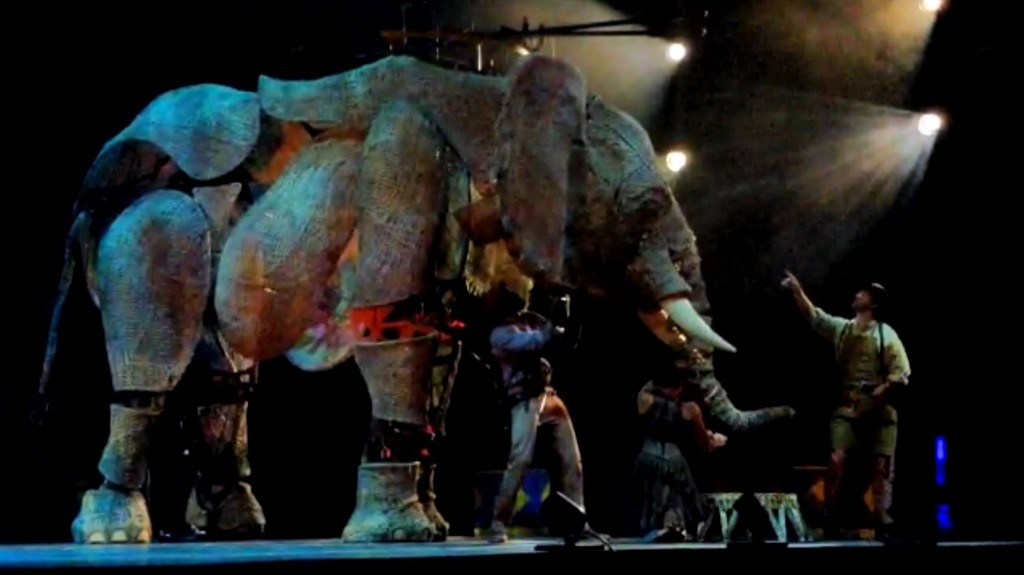 I had been asked about the possibility of joining the show a good two years before, when I saw it for the first time during its Las Vegas run back in 2017.   I smiled and shrugged it off, thinking it wasn’t a serious thing.   My good buddy, David Williamson, had talked to me about it, as he was the original ‘ringmaster’ and still appears in it to this day. (It will soon be going back to London and David will be part of that tour.)  David does an incredible job in the role, and it was a joy to see him as part of the show back then.  Well, cut to this year, and my name was being bandied around again, and this time it felt right and my calendar was a little more flexible to consider it seriously.

What the producers didn’t realize was that this was a cool ‘fit’ for me because I actually grew up on circuses!  Seriously.  My parents were circus performers and I traveled all over the world with them, appearing in various circuses and arena shows for the first 12-15 years of my life.   My mother and father met while both were working on Ringling Bros., back in the 1960’s.   My father was with the show for 7 straight years, as a clown, during the ‘golden age of clowning’ where the old masters were still there.  Otto Greibling, Lou Jacobs, and more.  This was long before Ringling decided to open a ‘Clown College’.  These were the days where many of the dates were still ‘under canvas’.   My mother was a dancer and aerialist, and they soon started dating.   As Ringling was wrapping up, they got hitched and I came along soon after.  We then continued to travel the globe with a variety of shows and circuses, and even had an aerial rigging in our backyard for my mom to practice on when we weren’t ‘on the road’.  As a kid I got to experience the world many times over and have fond memories of far off places and cities.  My home was a trailer or apartment, but my ‘backyard’ extended around the planet. 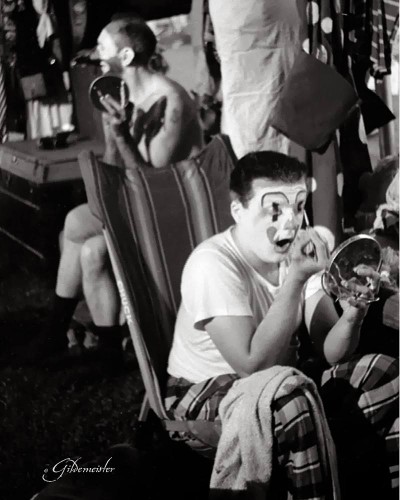 My father , Chuck Burnes, putting his makeup on, in ‘Clown Alley’ during his Ringling days in the early 60’s.

My ‘sawdust’ past and expertise on circus and its history has helped me a lot with this new gig.  My father had also been a ringmaster quite a few times in his career, and I had even ringmastered a few shows here and there in my early 20’s.   And I just love the role in this wonderful theatrical extravaganza.   In a few days we take this production to Kuwait for two weeks, playing one of their premiere theatres.  A few months ago we did a 3-week run in Jeddah, Saudi Arabia, which was interesting.  But what was really amazing is just how universal circuses are.  Our audiences were packed each and every performance, and boy were they enthusiastic!   A ‘vintage’ circus set in the early 1900’s, that would ironically receive raves like it was an energized, rock-n-roll concert.  What a great feeling!

If the show comes to a venue near you, don’t walk, rush to see it.  It’s a great evening out that’s suitable for all ages….You know, just like a circus should be!  Cheers!   🙂